Dead bodies piled up in 4 graveyards of Morbi, 150 people are engaged in digging graves: Employees told – never dug so many graves, working without eating and drinking ABBO News 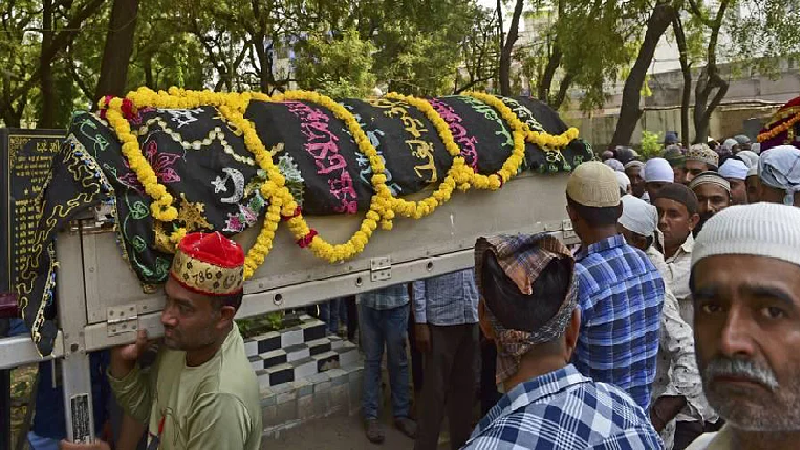 On Sunday (October 30, 2022), the entire country has been shocked by the accident caused by the collapse of a bridge over the Machhu river in Morbi, Gujarat. So far 141 people have died in this accident. Also, around 100 people have been injured. NDRF teams, three army personnel and local people are still engaged in relief and rescue work. Search is on for those missing in the accident.

After this horrific accident, the way the death figures were coming, everyone was shuddering. After the accident, there was a line of dead bodies in the biggest graveyard of Morbi. The condition was that 26 people were buried in the same cemetery in the city. For this, from the night of the incident till 7 pm the next day, about 150 people were busy digging graves here. Waiting was going on for the burial of the dead in 4 cemeteries of the city.

Actually, the workers working in the cemetery could not dig so many graves. Therefore, the graves are dug after the cooperation of the relatives of the dead. Everyone was waiting for the dead to be buried. But, it was getting delayed due to paucity of coffins and increasing number of dead bodies one after the other.

The chief caretaker of this cemetery, Ghafoor Pastiwala, has said that the accident caused by the collapse of the bridge had surprised him. They had to dig 40 graves overnight. Within 12 hours, 20 people were buried in the cemetery, including 8 children. He has said that he had never dug so many graves at once. Pastiwala, pointing to the line of four graves in the cemetery, said that these people belonged to the Sumara family. 7 members of the family have been killed. Among them are 4 women and 3 children.

Mohammad Tawfiq, the officer in charge of a cemetery, says his staff were working non-stop to help the families of the victims. He further said, “We have neither slept nor eaten anything since last night. The whole area is immersed in mourning. We are all feeling broken and scattered. I have no words to describe the loss caused by this accident. I think there is nothing that can ease our pain.”

Local businessman Rafiq Ghaffar had come to the cemetery to bury his two nephews Nisar Iqbal and Armaan Irfan. Gaffar expressed grief and said that it was a terrible tragedy. He told that people were crying and screaming. After all, it seemed like a doomsday. There were dead bodies floating everywhere in the river. People trapped in the bridge were screaming for help.

Habibul Shaikh, a resident of East Bardhaman district of West Bengal, had come to Morbi for work in the accident caused by the collapse of a bridge in Morbi. But, due to the breaking of the bridge, it got absorbed in the cheeks of Kaal. Habibul’s death is in a bad condition for his family members. Her father Mahibul Sheikh has said that this was their only child.

#MorbiBridgeCollapse , Naim Sheikh, admitted to Civil Hospital in Morbi, says, “6 of us had gone there, 5 came back, one died. I can swim. My friends & I together managed to save a few people. It was heart-rending. I got hurt when I was bringing the people to safety.”#Gujarat pic.twitter.com/XehTiSPuwt

One of the survivors of this accident, a person named Naeem Sheikh, is admitted to the Civil Hospital in Morbi. Naeem Sheikh said, “We 6 people went there. One of whom died. Only 5 have come back. I can swim, so I survived. Me and my friend together have saved some people. It was a horrifying accident. I got hurt when I was bringing people to a safe place.”