Gujarat Election: Congress released the first list of 43 candidates, who got the ticket from where ABBO News 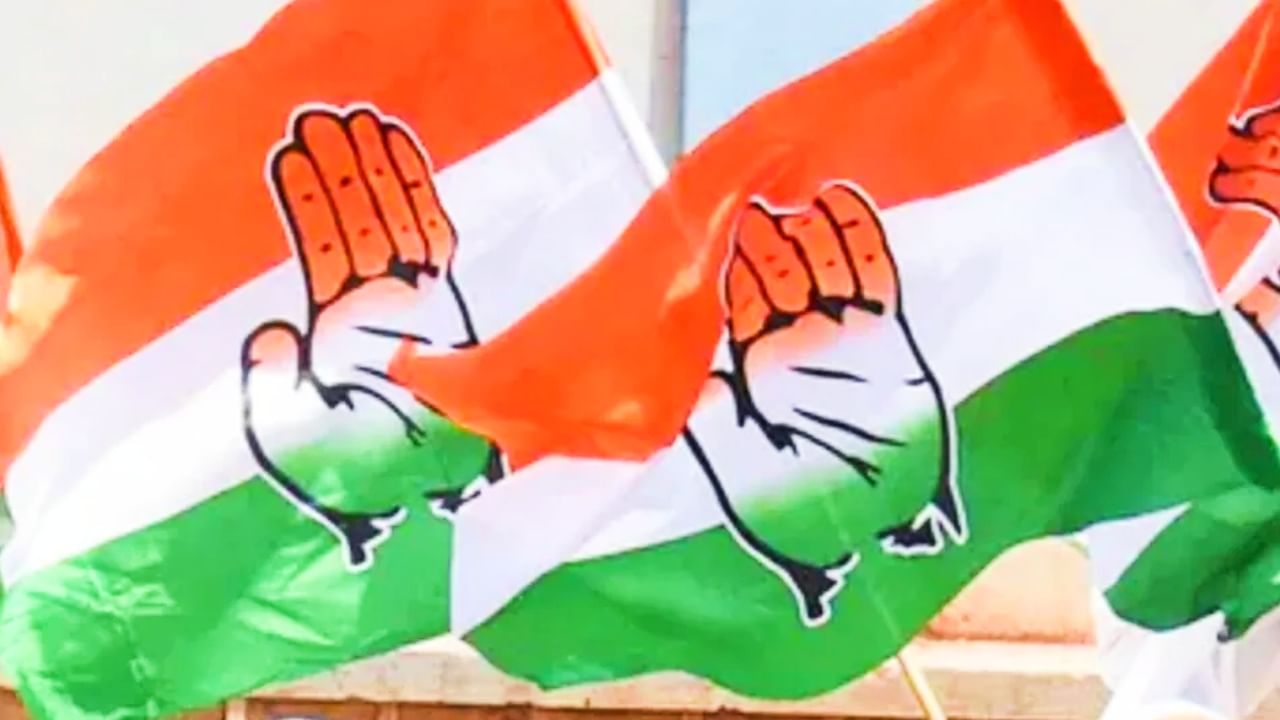 Congress has fielded Arjun Modhwadia from Porbandar and Mukeshbhai M Desai from Kherlu seat. At the same time, the party has made Hitesh Arora its candidate from Rajkot South. 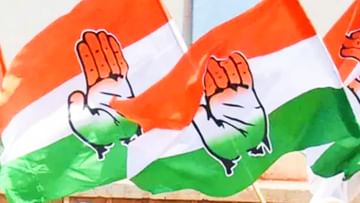 in Gujarat assembly elections The Election Commission has announced the dates for Polling in the state will be held on December 1 and 5, while the results will be out on December 8. Meanwhile, Congress has released the first list of 43 candidates for the elections. Congress has given ticket to Kamlesh Kumar from Himatnagar. At the same time, the party has fielded Dr Himanshu Patel from Gandhinagar. From these two seats, the Congress is being told a direct fight with the BJP.

At the same time, the party has fielded Arjun Modhwadia from Porbandar and Sanjay Bhai from Deesa. The party has made Hitesh Bhai Arora its candidate from Rajkot South. From Surat West, Sanjay Rameshchandra will be seen fighting on the party’s election symbol as the party’s candidate. This time the Congress high command has also assessed the effectiveness and activism of the candidates in the area during the selection of the candidate. 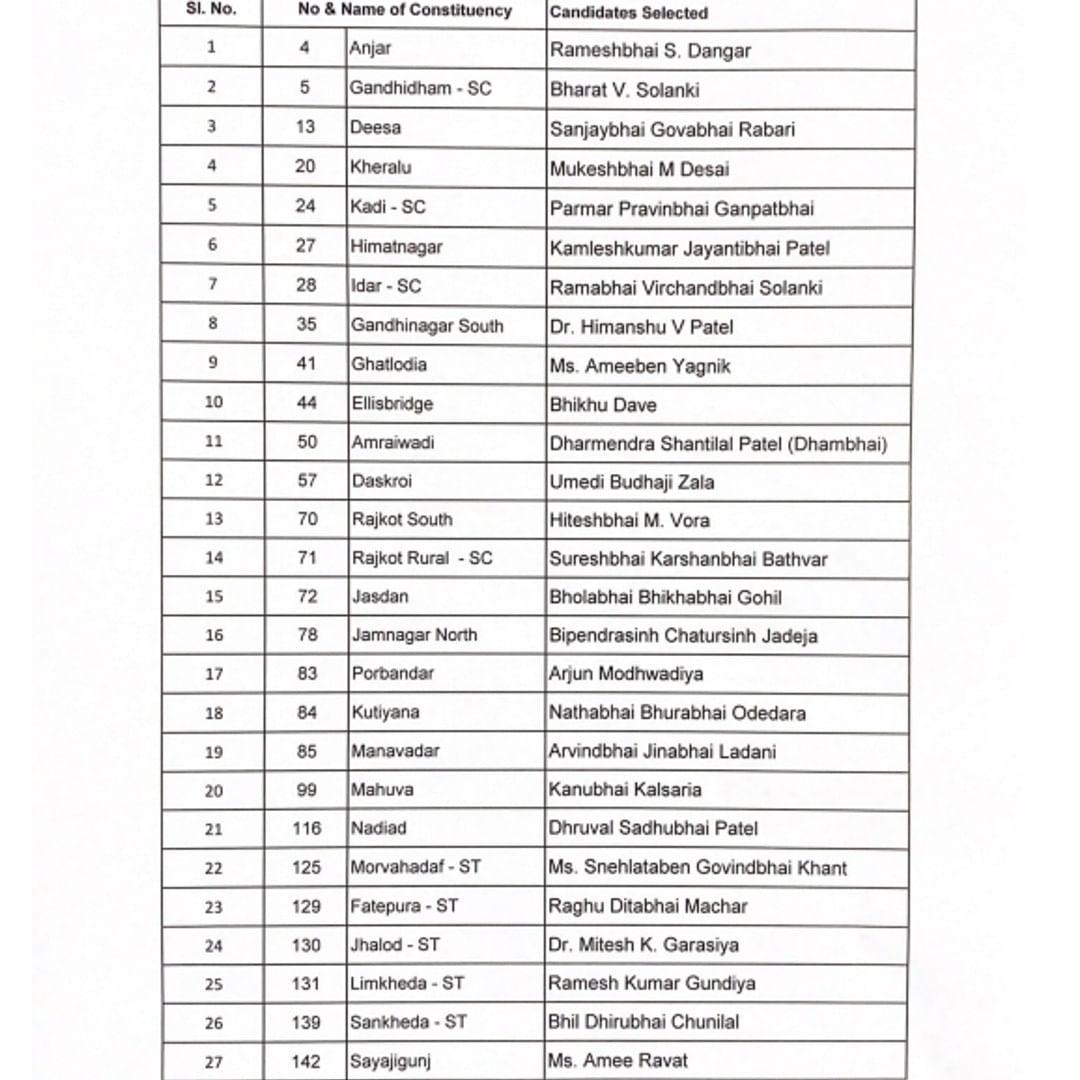 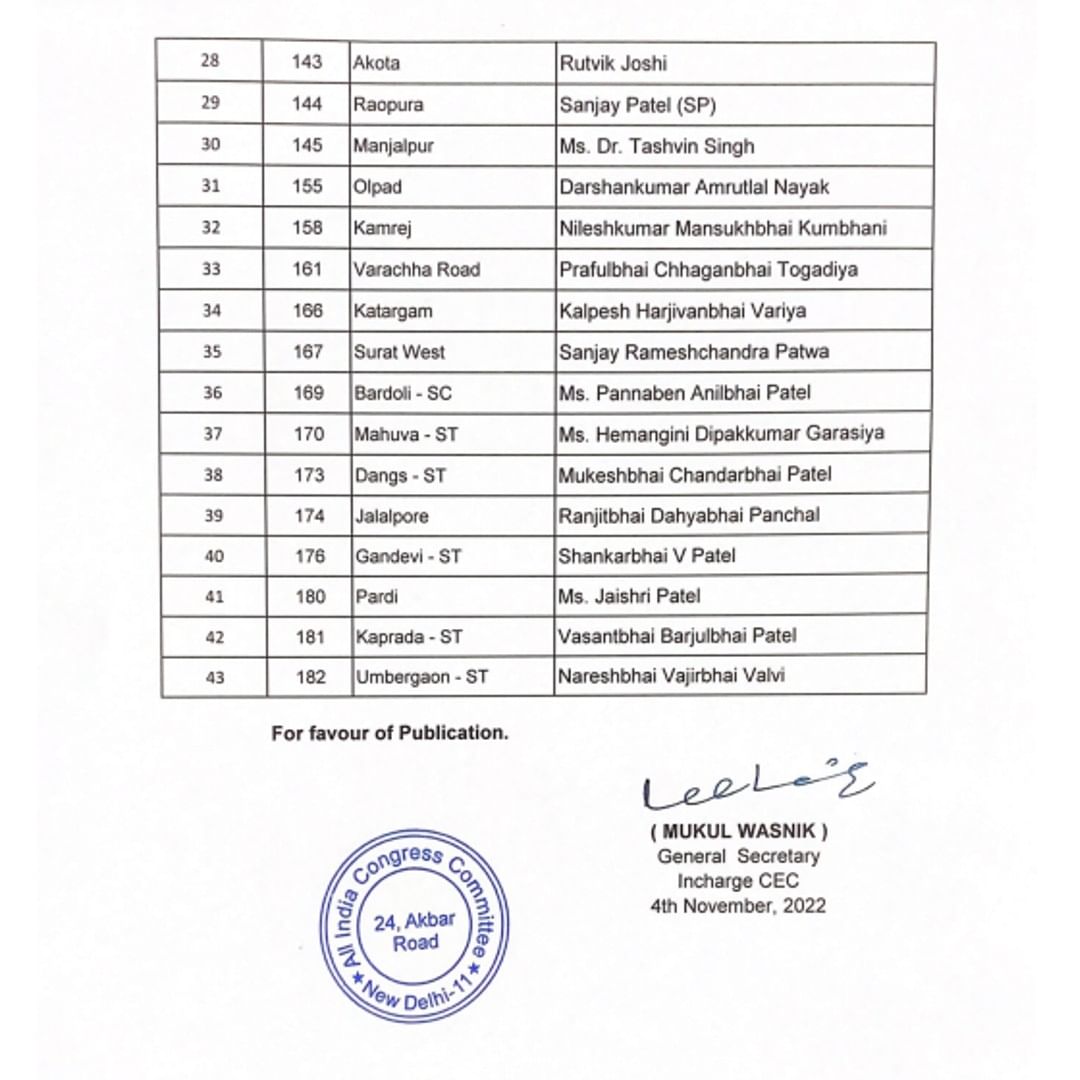 The Congress party has fielded Rameshbhai S Dangar for the Anjar assembly seat and Bharat V Solanki from Gandhidham (AC). Mukeshbhai M Desai is contesting from Kherlu seat and Parmar Pravinbhai from Kadi seat as Congress candidate. Apart from this, Sureshbhai Karshanbhai has been fielded by Congress from Rajkot Rural. The party has fielded Bhipendra Singh Chatursingh from Jamnagar North. At the same time, Ritvik Joshi from Akota and Sanjay Patel from Raopura are contesting on Congress ticket.


In the last election, BJP had won 99 seats.

In the last election, the Bharatiya Janata Party could win only 99 seats. In 2017, the Congress had won 77 seats. This year, the Congress gave a tough fight to the BJP in the elections. At the same time, the BJP got 1.15% more votes than in 2012, but the seats were reduced from 115 to just 99. However, later 14 Congress MLAs joined the BJP.