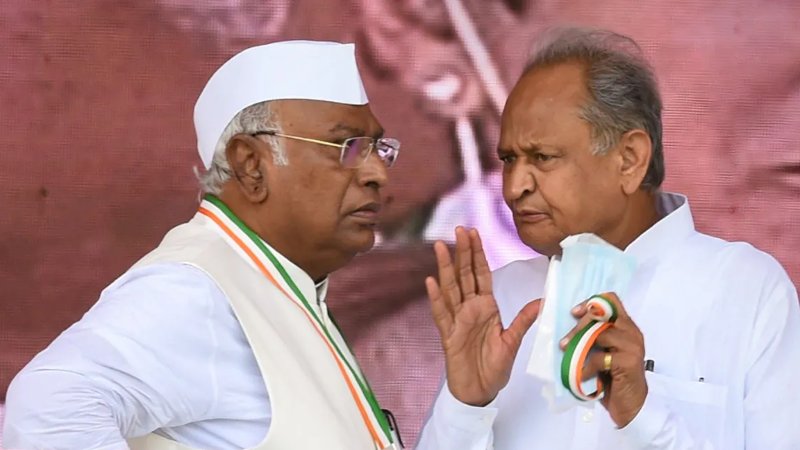 While in power, the Congress has a different policy and a different form of opposition. If it is election season and promises have to be made, then Congress makes such promises, which it breaks itself after coming to power. Be it the promise of loan waiver for farmers or the opposition to reinstatement of youth on contract, the Congress has been exposed on both the fronts.

In fact, the newly elected Congress President Mallikarjun Kharge said that he has promised to stop the contract system if he returns to power in Gujarat. At the same time, the Congress Government of Rajasthan has issued an order to recruit 10,000 teachers on contract in Mahatma Gandhi English Medium Schools.

This is not the first time that there is a difference in the words of the Congress. Party General Secretary Priyanka Gandhi had criticized the BJP government in UP by calling the recruitment of youths on contract as an insult to them. After some time, the Congress government of Rajasthan had announced to recruit computer teachers on contract.

In fact, Congress President Mallikarjun Kharge tweeted on Thursday (3 October 2022) announcing the party’s ‘8 resolutions’ for the Gujarat Assembly elections. Explaining these resolutions, he made two tweets. There is also a resolution ‘to stop the contract system in government jobs and to give ₹ 300 unemployment allowance’.

In his tweet, he wrote, “LPG cylinder for ₹ 500, electricity up to 300 units free, treatment and medicines up to ₹ 10 lakh free, loan waiver for farmers up to ₹ 3 lakh, contract system closed in government jobs and ₹ 300 unemployment allowance, ₹ 5 / liter subsidy on milk in 3 thousand Government English Medium School, Co-operative Society, ₹ 4 lakh compensation to the family of 3 lakh people who lost their lives due to corona.

Just a day before Congress President Kharge’s tweet, the Ashok Gehlot government of Rajasthan announced to recruit 10,000 teachers on contract separately in Mahatma Gandhi English Medium Schools. With the aim of promoting English medium education in the state, the Congress government of the state has opened these schools.

The Government of Rajasthan has made a policy this year for the recruitment of contractual personnel. It is known by the rule of ‘Contract Recruitment Rules 2022’. The recruitment of these teachers on contract will be done under this rule. There is a lot of opposition to this policy of the Rajasthan government.

Actually, on 13 December 2020, Priyanka Gandhi had tried to surround the North government on the recruitment of contractual workers by tweeting. He had said, “The youth demand jobs and the UP government offers to keep the recruits on contract for 5 years. The youth are being challenged by sprinkling salt on these burns. This is the fixed pay system in Gujarat. Salary does not increase over the years, permanent do not. Will not let the self-esteem of the youth take away.”